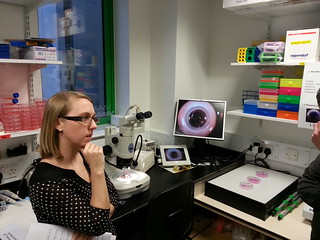 Researchers into aniridic keratopathy held a event so they could meet people affected by the condition so they could learn about each other.

Corneal opacification affects people with aniridia because of deficiencies in the eye’s limbal stem cells. The Cells for Sight Transplantation and Research team at University College London (UCL) is working to understanding it and develop treatments.

The Cornea Connect meeting on 14 February 2014 was the first of its kind at the UCL Institute of Ophthalmology which is attached to Moorfields Eye Hospital.  It aimed to bring together scientists and patients with a common interest in the cornea and to talk about the challenges faced by both parties.

Several members of Aniridia Network UK attended and some gave presentations. Chair Katie Atkinson said afterwards “We want to say thank you for organising this event which was really interesting and valuable. We would like to work with Cells For Sight to help do more activities like this in future.”

Indeed representatives of Cells For Sight will be giving a presentation about their work at the Aniridia Network UK Conference 2014.

Find out more about the day including videos and photos of the day such as this introduction from Julie Daniels who also sits on the Aniridia Network UK Medical Panel..

Read Victoria’s article A day in the life off a aniridia research scientist.

A charity support group for people with the genetic visual impairment aniridia and their families in the UK and Ireland. Our vision is that people with/associated with aniridia are hopeful, confident, supported and well informed regarding aniridia. Founded in 2000. First registered as a charity in 2011 and fully in 2018.
View all posts by Aniridia Network →
This entry was posted in ANUK news, Other agencies, Patients' tales, Research and tagged Limbal stem cells. Bookmark the permalink.

4 Responses to Cornea Connect brings researchers and patients together