Posted on December 9, 2019 by Aniridia Network 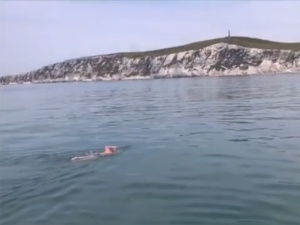 A woman has raised £2,629 for people with aniridia and WAGR syndrome by completing a gruelling swim across the English Channel – at the second attempt.

Nicola S Morgan took on the challenge to help buy a £1,800 electronic magnifier for 7 year old Mari who has WAGR. The remaining £600 collected was split between Aniridia Network and International WAGR Syndrome Association (IWSA) – support organisations that Mari and her parents are members of.

Nicola only learned to swim in 2011 – by teaching herself. She had a desire to understand the power of mindset and resilience, so set herself the huge goal of swimming the ‘Mount Everest’ of swims from Dover to Calais. It is an accomplishment completed by only around 1,800 people, just 36% of them women.

In 2017 she started near Dover and spent 14.5 hours in water. She was pulled from the sea just 4 miles away France, as she was stuck in a relentless current.

She felt she had let herself and the crew down. However, a comment from the support boat’s captain convinced Nicola to try again: “You haven’t failed, it’s just unfinished business”.

For the past two years, Nicola has trained tirelessly in seas, lakes and swimming pools –sometimes for over 8 hours a day, a few times a week. She acclimatised herself with ice baths, and developing her swimming technique.

Throughout the long and difficult training, Nicola has relied on the strength and support of her business partner, Einir Williams at NSM Training and Consultancy. Einir has also spent many months of her own time attending practices across the country – always there to give her support and motivation.

On the night of the 2nd swim, Einir was one of the key members of the support team on the boat ‘High Hopes‘. They monitored Nicola’s progress, prepared her feeds and gave her constant encouragement to continue, such as ‘‘it’s your turn to win’’. Nicola knows that she could not have achieved her goal without Einir by her side throughout the entire process, and would like to give a special thanks to her.

The next try began at 11.04pm on 16 July 2019. It involved swimming in the pitch black night, in chilling 8 degrees Celsius water, through swarms of jellyfish. Nicola developed a shoulder injury within the first 6 hours. Not an enjoyable experience! The next day, after 15 hours and 46 minutes Nicola succeeded in the phenomenal task. Her 33km exhaustive swim ended with cheers from locals on the French beach.

An amazing feat such as this requires dedication, courage, and an unbreakable level of resilience – skills which Nicola advocates strongly to everyone she meets. 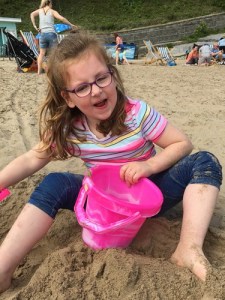 Nicola was mainly raising money for Mari, from Caernarfon in North Wales.

Mari has aniridia as part of the extremely rare WAGR syndrome. At just 7 years old, she has already had 11 surgeries. When only 12 days old she was rushed to hospital for an operation on her bowel. A few days before she was 1, doctors discovered she had 7 tumours on her kidneys. A year of chemotherapy and surgery followed to deal with this cancer, which can develop as part of WAGR.

Her aniridia means she is registered blind, lacks depth perception and struggles to see in bright light, but can read very large text close-up – which she very much enjoys.

Although, her recent hospital check-ups have been she is at risk of tumours returning and losing more sight.

Mari is a loving, caring and affectionate child who charms everyone she meets. She is very determined and has relied on her resilience to find her own way of doing and enjoying things. She is very much like any other child who enjoys swimming, crafts, dancing and riding her sccoter! Mari’s parents are keen that she is treated like any other child who simply needs a bit more supervision to ensure her safety. In her short life she has been through so much but she is such a happy little girl, she is really tough and doesn’t complain about anything.

Mari attends a mainstream school and loves it there. She has additional support and is learning braille. She requires learning aids and equipment to support her with her learning.

After hearing of Mari’s story, Nicola was determined to achieve her goal and raise as much money for Mari as possible on the way.

Mari’s parents were raising money for an Optelec Clearview HD. It is a video magnifier that enlarges the text and images on paper to a size Mari can see.

With the sponsorship Nicola earned they were able to buy this life-changing piece of equipment for £2,800.

Using the device, she can now read and learn more, two activities she loves. This will help her gain independence.

“Thanks Nicola for your kindness and bravery swimming the channel!
Mari loves her new Optelec, here she is reading before bed…🥰 xx”

There was still money left over and so this was split into donations to two relevant charities.

IWSA promote knowledge and awareness of WAGR syndrome and its complications and treatments, to stimulate research and to reach out to those affected, in an effort to improve their lives.

It is a not-for-profit organization, comprised of a network of families, health care professionals, educators, and others who care for individuals with WAGR syndrome. Its members are located all over the world.

Membership of both organisatiosn is free. Their funding for the organization comes from donations and fundraising activities led by member friends and families.

In October there was a donation handover ceremony. Former Aniridia Network trustee Emily received the £300 cheque and said:

“Well done for your amazing feat. This money will help Aniridia Network help families just like Mari’s with providing support and education and help all those people with aniridia achieve their goals too.”

The money will go towards organising supportive events for patients, subscriptions, grants for research into sight saving treatments, and creating information leaflets/newsletters. It will make a big difference to people with aniridia.

Massive congratulations and thank you again to Nicola on her achievement and generosity.

A charity support group for people with the genetic visual impairment aniridia and their families in the UK and Ireland. Our vision is that people with/associated with aniridia are hopeful, confident, supported and well informed regarding aniridia. Founded in 2000. First registered as a charity in 2011 and fully in 2018.
View all posts by Aniridia Network →
This entry was posted in Fundraising and tagged English Channel, fundraising, swimming, WAGR. Bookmark the permalink.