Haya’s journey to an aniridia conference

Getting to know each other sesion at Aniridia Network Conference 2019

My name is Haya. People are often curious in what I do and how I got to university with developmental delays. They ask me what my hobbies and interests are and the general
questions that you ask a person in their early 20s. Add a vision impairment and it makes for some rather interesting questions. Growing up everyone has struggles, but even more for disabled people.

Being visually impaired I do not get out much. I am not saying I don’t leave the house, but I don’t do much when I do. Everywhere that is worth going has one problem: other people. There is too much light, too much noise or too many people.

I have been told countless times that I live my own little world, disregarding the importance of friendships and avoiding social interaction overall. Therefore I’ve had to go through the same stages where you try to figure out: who you are, what you want to do in life and where you want your life to go, just on a deeper level.

While I push through the journey of trying to improve my social and interpersonal skills, I’ve also have had to adapt many aspects of my life in this world which wasn’t suited to the needs of people with a vision impairment. I believe the world is made for the average and the majority: sighted people. That is not who I am.

Media perpetuated stereotypes, misconceptions and constant accessibility issues that we face on a daily basis cause some to feel a need to change ourselves to ‘fit in’ with society.

Don’t get me wrong, there’s also the positive side to living with a disability, there’s far reaching research updates to read up on and participate about your eye disorder. There are things I can do which others can’t. For instance I’ll know my way around a certain place better than a sighted individual. In addition, there are upcoming revolutionary improvements in technology and access to employment.

However, I’m not the one to sugar coat anything so I’ll give you an honest glance and accurate representation of what’s it’s like to live with a visual impairment in a specific scenario.

It is usually easier to take part in the world, interact with it, when there’s a really good reason. This June gave me a reason to try something different

I would have loved to be at the previous conference, and I followed its updates intently online. But in person I would have found it almost too much to process, not just on an intellectual level but also an emotion level.

In the run up to this years event, I was in the middle of my exams. My emotions were
aroused and intense6. Life happened and I suddenly realised that again I was finding it difficult to motivate myself to go.

Finally, after talking to my visually impaired friends online I decided that even though half of 2019 had gone, I still had a chance to turn things around by going to the
event.

Not only did I want to understand my rare condition more, but also I wanted to feel
connected/united with people from different places through the love of accepting differences. I had just completed my first year at university and I felt throughout my studies that I thought about my disability a lot. The lack of support I was receiving reinforced this.

I met peers from many different countries, but once they realised I wouldn’t be able to get from A to B and that I had been so bombarded with ‘support meetings’ they stopped approaching me. My course was packed with students, I waited outside each lecture pretending to look around to see if I could find those I knew, but still no luck. I didn’t text as an alternative because that would increase the ‘realities’ of my shyness and stress.

At the Aniridia Network Conference 2019 I met several people pursuing or working in similar career paths to me, psychology and social work, or different ones like mathematics and engineering,

Some had aniridia run through their family, some were parents whose child recently got diagnosed with the condition . No one in my family has aniridia. It fascinated me to get to know how a mother and daughter who both have aniridia and so had different interactions and understandings of one another. I spent most of the lunch break with them, which truly left me with treasurable memories.

I also talked to Dr Ngozi after her speech to congratulate her on the work she has done to highlight the voices and the work of researchers. It has honestly been pivotal in my limited understanding of the developmental delays some people with aniridia
are affected by. I really admired her willingness to stay in touch with others despite being busy whilst she works at the leading Great Ormond Street and Moorfields Eye Hospital.

My other highlight was listening to the speech by Miriam. From the start Miriam was full of hope. Not naive or unbridled hope, due to various health conditions, but a sense that a commitment to optimism and standing up for yourself would help to ensure that an individual can genuinely fulfill their potential and achieve.

Miriam’s speech was one of the most thought-provoking sessions at the conference, It challenged us to consider our position in the visually impaired community and reflect on other perspectives, opening our lens on the world. Her experience of aniridia was different to the others in the room, such as living with diabetes, using a wheelchair and an oxygen ventilator. I found her story (rather than disablity) inspiring.

I haven’t met many visually impaired people, but I felt I related to those
affected by aniridia more than any others I have met in the past few years.

There was a patient discussion group, which I thoroughly enjoyed, as a variety of interesting topics were covered. This was very useful to compare everyone’s experiences, gather information and share advice such as about hospital appointments, mentoring schemes, research grants.

Miriam was a very proactive person in the group consistently giving input/feedback in a
confident manner. She informed us about organisations that helped visually impaired people improve their confidence in the workplace, such as Purple Space. She was very open when expressing herself and the importance of different topics. All this takes a lot of courage and resilience so I admire her for all her commitments on the day.

Later in the day, I was very happy to talk to two of the trustees of Aniridia Network. I got this opportunity by coming out of my shell and prompting myself. I believe if you don’t ask for things, you can’t gain anything. I thought to myself what’s the worst that could happen. If anything, they would understand me if I made a mistake because they have a visual impairment as well. At some point in their journey they would have lacked confidence, but now their confidence shines like it was never a weakness before.

I asked them if there was any availability of volunteering opportunities, because I wanted to make a difference in people’s lives and I was keen on starting to write blog posts myself. But I never found the right foundation or platform to start doing this, except utilising social media sites like Instagram.

The start of my volunteering with Aniridia Network is by writing this conference review and I would be thrilled to continue to in any capacity. The charity is run by volunteers and the growth stories they have are so engaging, inspiring and motivating

On the way home, I regretted that I didn’t get to speak to everyone in person. But the truth is everyone at the conference had brought with them intriguing unique stories and a myriad of reasons for engaging. The time spent with each individual added a layer of richness to the experience of being in their company.

Overall, for me, hope remains the abiding emotion of the conference. It resonated with those in the room and those following online. It is also a call to action to appear more in public, gather and share as much existing information as possible between now and the next conference.

With that all said, I would just like to say a huge thanks to those at Aniridia Network for maing the conference happen. I am honoured to write about how I thought this very important event went. 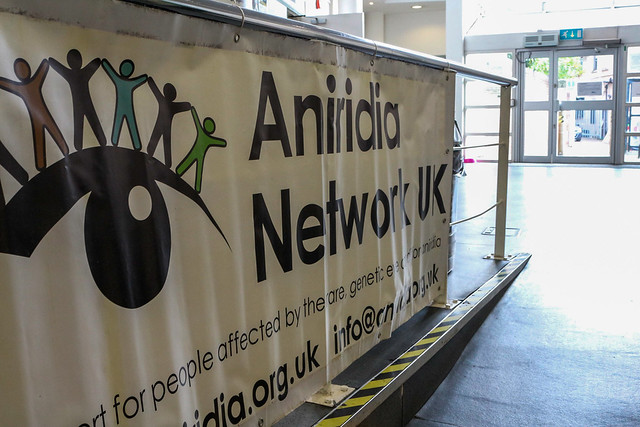 This entry was posted in Patients' tales and tagged conference, conference2019, event. Bookmark the permalink.

1 Response to Haya’s journey to an aniridia conference