Posted on February 27, 2017 by Aniridia Network 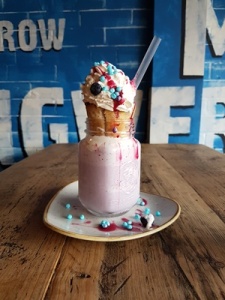 A business has found an alternative way of raising money for our charity to shaking collection tins – shaking milk!

The Pour House in Shrewsbury opened in 2015 as a coffee house by day and cocktail bar by night.

Between 25-28 February 2017 they served a special milkshake to celebrate Rare Disease Day on the 28th. For every one sold, a generous £1 was donated to Aniridia Network UK. It was a lemon milkshake topped with whipped cream, a gluten-free blueberry muffin, blueberries, raspberry millions and blueberry sauce. The blue, pink and white match the day’s colour theme. It looks awesome.

For the previous 3 months 50p from the sale of each of their most popular ‘really scrummy’ milkshakes ‘Oreo Overload’  has been donated to International WAGR Syndrome Association. So far this has brought in more than £250. 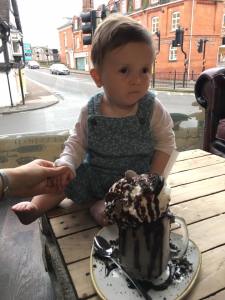 Owner Paul has a daughter with WAGR. He said “predominantly this money will be donated to the IWSA as this is obviously most relevant to us but we felt that other charities that we come into contact with should also be included such as ANUK and local charity OneVision.”

“The idea came from our Manager Katie who has been raising funds the same way from day one but through a cocktail instead for the charity Village Water, it was then Nicola’s idea to duplicate this on a milkshake.”

Fifty blueberry shakes were sold.  Paul has added £100 from the Oreo shake sales to make a total donation of £150 for ANUK.

We are so grateful for the wonderful inventiveness and generosity of the staff and customers at The Pour House.  Stop by for a drink if you can!

A charity support group for people with the genetic visual impairment aniridia and their families in the UK and Ireland. Our vision is that people with/associated with aniridia are hopeful, confident, supported and well informed regarding aniridia. Founded in 2000. First registered as a charity in 2011 and fully in 2018.
View all posts by Aniridia Network →
This entry was posted in Fundraising and tagged fundraising, rare disease day. Bookmark the permalink.