After Conference 2013 delegates were invited to a sport and social evening.

The sport part was a short taster session of indoor visually impaired (VI) tennis. If you didn’t want to play, you could just watch and socialise, but everyone was encouraged to give it a go even if  sighted.

Afterwards we had pizza and time to chat. 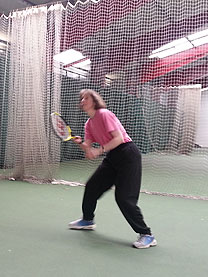 Sarah prepares to return the ball

VI tennis is played with a foam ball with a bell inside. making it slower and more audible than a regular tennis ball. The number of bounces allowed before returning the ball depends upon the players level of sight:

All people with a visual impairment aged 5 years old and over.can play tennis against each other or with sighted people.

Watch this excellent video of the sport that also feature the qualified and visually impaired coach who will be leading our session.

ANUK trustees Sarah and James sampled the sport in advance and said. “It was great fun being able to play a sport we previously couldn’t. We think sighted parents will especially love playing it with their visually impaired children.”