Posted on February 6, 2019 by Aniridia Network

By Rob and Amelia

From about 5 months old our daughter, who has sporadic aniridia, has shown an interest in LED lighting.

After speaking with doctors at Moorfields Eye Hospital and more importantly, all the lovely people we met at the Aniridia Network Conference and on the Aniridic Family group, we decided to build a light centre! 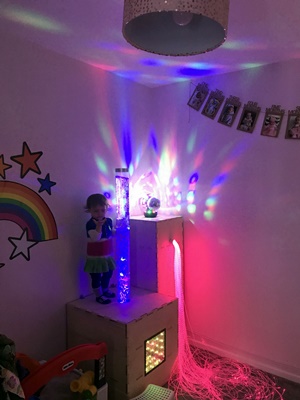 We had some help from my wife’s workplace and family bought some of the parts for her birthday. Most of the equipment was sourced from Amazon and eBay. I designed the boxes and Amelia had them cut out at work using a laser cutter. Sabrina absolutely loves it and the older she gets the more and more she interacts with it. We hope it helps with visual stimulation but mostly we made it for her to enjoy it. Her favourite part is definitely the bubble tube which is relatively inexpensive. She also loves the disco lights and plays very intricately with the fibre optics; these are very sturdy and made especially for children who have autism or to give visual simulation.

Children who are visually impaired may not independently explore their “regular” environment. Providing a range of stimuli helps children to develop and engage their senses and supports their physical development. These stimuli can include lights, colours, sounds, sensory soft play objects and aromas.

If you can’t stretch to your own light stimulation centre, check out these toys which can help the development of children with visual impairments.

A charity support group for people with the genetic visual impairment aniridia and their families in the UK and Ireland. Our vision is that people with/associated with aniridia are hopeful, confident, supported and well informed regarding aniridia. Founded in 2000. First registered as a charity in 2011 and fully in 2018.
View all posts by Aniridia Network →
This entry was posted in Parents' accounts and tagged visual stimulation. Bookmark the permalink.