Sunday 16th February 2014… 12.30pm I got the phone call I had been waiting for. My sister, my best friend had gone into labour and was due to give birth to my nephew. As a mother myself having given birth to my own daughter and loved every minute of the birth experience I was thrilled to have been asked to be her birth partner.

Fast forward 7 hours and 45 minutes…after 9 problem free months of pregnancy and a labour that sailed so smoothly at 8.05pm little Charlie was born, all 7lb 5oz of him.

That first cuddle was amazing, that recognizable smell of a new born baby took me right back. I was so proud of Laura and this little man before me, he was here, the wait was over but we was yet to discover our joy would be short lived.

The next morning we awaited the phone call to say Laura and her little bundle of joy could come home… sadly the only phone call we got was to say Charlie wouldn’t be coming home that morning, they had picked up a problem with his eyes and he would remain in hospital with Laura until Charlie had seen a specialist.

After a long and upsetting 2 weeks of tests, numerous consultants, scans, trips to Manchester and an operation at just 14 days old Charlie had a diagnosis: aniridia.

Charlie is registered as blind. he has aniridia in both eyes. He was born with one eye smaller than the other and is registered blind . He will almost certainly be completely blind in this eye and have very limited vision if any in his other eye.

Charlie screams in pain if he greeted by light. Just being near a window, going outside, the lights in the super market, all these cause Charlie discomfort. At just 4 months old he has to have

Laura is praying for a dark winter to come early to protect her son from the bright late nights the summer months bring.

Along with the aniridia condition itself Charlie has cataracts and glaucoma. Associated with the aniridia is a condition called WAGR which causes kidney tumours. Charlie and Laura have had genetic testing to see if Charlie has WAGR syndrome and also to see what risk there is of Laura having further children with the same condition. The results will not be available till October. We wait and pray that Charlie will get the all clear. 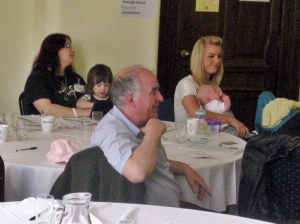 Laura and baby Charlie and others at ANUK Conference 2014

Laura attended a conference in Bristol recently put on by this poorly funded charity which provided Laura with a wealth of information and support and gave her the opportunity to meet other family’s and children with the same condition and put her in contact with the support groups she needs to be able to raise a child with visual impairment.

Charlie asleep in his pushchair at the ANUK Conference 2014

With the charity having less than £6,000 of fundraising income last year i have decided to take on a challenge to raise money for it. They hope to raise just £4500 this year, if I can just make a small dint in that this year I would be happy.

So I decided to seek sponsorship to take part in the Great Manchester swim, a one mile open water swim in the docks off the Manchester Ship Canal.

Being probably the un-fittest i have ever been and less than 3 weeks worth of training time before the event this was a challenge for me but one look at my little nephews face provided all the encouragement I needed. I was laughed off by my nearest and dearest, I have never swam in open water, I haven’t swam or exercised in over a year and had minimal training time.

I asked friends and family to do whatever they could can to support not me but the charity that is close to my heart, my family’s heart, Charlie’s mother Laura’s heart and which during his life will continue to be a part of her beautiful little boys life.

After the first go my training partner Luis siad “this open water malarkey was so MUCH harder than I expected! After swearing I’d never put myself through it ever again, we arrange to go again 4 days later.”
Over the next 3 weeks we trained in various quaries in Wigan and Carnforth. 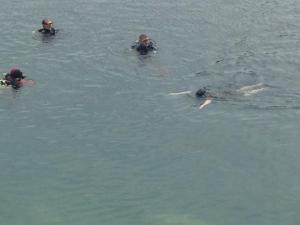 I saw that people had donated £500 in the first three days via my fundraising web page. There was no backing out then!

The local press were very interested in the story. Articles were published in the Burnely Express and the Lancashire Telegrapph – fantastic. If my ugly fat mug on the front of the paper wasn’t worth a donation then i don’t know what is! 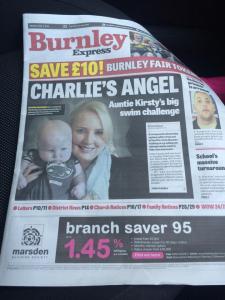 Then staff children, parents and carers at our nursery held a fun day. They raised a massive £542 with – awesome.

The day before the swim I finished making t-shirts with Charlie’s picture on the front for my supporters to wear including Charlie himself. 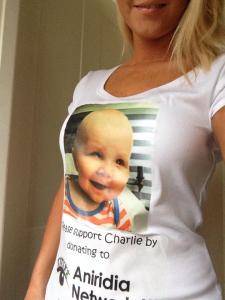 The 3 weeks had gone so quickly. Then suddenly I’d done it!!!!!! In around 50 minutes! I was so happy. Thank you to all my amazing friends and family for walking around the course in the torrential rain! Thank you to each and everyone of you that sponsored and supported me! We had smashed my £250 five times over. The total an incredible was £1,252.

A charity support group for people with the genetic visual impairment aniridia and their families in the UK and Ireland. Our vision is that people with/associated with aniridia are hopeful, confident, supported and well informed regarding aniridia. Founded in 2000. First registered as a charity in 2011 and fully in 2018.
View all posts by Aniridia Network →
This entry was posted in Fundraising, Parents' accounts and tagged diagnosis, fundraising. Bookmark the permalink.