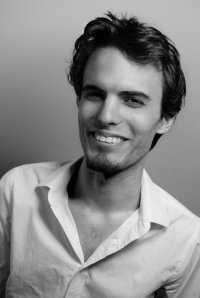 Being born with aniridia, I’ve spend most of my life discovering that people often know who I am long before I ever meet them. Word would spread quickly around the schools I attended and the places I went, and I would learn how quickly we, as a species, will jump to conclusions.

I acquired an affinity for writing at a very young age, and one of the things that drew me to it was the way that fantasy can be used to make observations about the real world without the context of everyday life giving the reader bias and preconceptions about those ideas.

For a long time I’d never written anything about aniridia or disability. I was very used to having people reducing my personality to that, and nothing else. I’m frequently asked how I cope with my condition, but really, it’s not something I have to cope with, it’s just who I am. If I’d lived all my life on a desert island I wouldn’t even be aware there was anything different about me, I’ve even once or twice caught myself forgetting that there is when I spend time in an environment where I can do things my way.

I’ve come to believe that it’s society’s narrow ability to accommodate differences that have been at the core of the difficulties in my life and not any inherent inferiority on my part, and it was this belief that would come to be the basis for a webcomic series that I now consider the best story idea I’ve ever had, and the first one I’ve ever written that was directly inspired by experiences living with aniridia.

A long time fan of comic books, having a condition caused by a mutant gene, I always took superhero origin stories with a pinch of salt; because I knew that even if someone were to survive an accident capable of altering their DNA the chances of the change not causing complications would be extremely small. But it wasn’t until I read an article on 7 Awesome Super Powers (Ruined by Science) [includes strong langauge] that I had the idea to use the  concept of having superpowers as an analogy for the way that being different can make it a challenge to fit in with everyday society.

I made my protagonist a superhero, an archetype normally associated with superiority and power, but who also faces problems informed by the ones I’d had living with aniridia, despite those problems being caused by the very things that give them their power. As the series goes on, my hope is to challenge the notion that the disabled are helpless, and to be pitied, as well as spreading the message that no matter who you are, it’s tough to be different.

Read the comic for free at www.adventuresofzip.co.uk

Contact us to tell your story about how aniridia has affected you.

A charity support group for people with the genetic visual impairment aniridia and their families in the UK and Ireland. Our vision is that people with/associated with aniridia are hopeful, confident, supported and well informed regarding aniridia. Founded in 2000. First registered as a charity in 2011 and fully in 2018.
View all posts by Aniridia Network →
This entry was posted in Patients' tales. Bookmark the permalink.