Earlier this year I travelled to the USA to take part in medical research related to aniridia. It and the accompanying holiday was a very special experience.

The National Institutes of Health in the United States of America is made up of 27 institutes. Each has its own medical research agenda but all supporting scientific studies that turn discovery into health. It is based on a large campus in Bethesda, Maryland, just outside Washington DC.

One such study is into a genetic condition called WAGR/11p Deletion Syndrome. It can have many symptoms including aniridia. The study’s purpose is to learn more about how the genes involved can affect those who have the conditions and hence to identify potential treatments. To achieve this, the researchers need to examine 75 people with aniridia as well as people with WAGR/11 Deletion Syndrome. In particular one of the genes that can be affected in the latter condition has been linked to obesity. A genetic factor to obesity could have relevance for the wider human population.

Invitations to be involved with in the study had gone out to people with aniridia. Beth and Jenny from Aniridia Network UK took up the offer. I wanted to as well.  I have always been keen to learn of and help advance medical understanding of aniridia to benefit me and others. I also saw it as a golden opportunity for me and my wife Zoe to holiday in the USA. NIH would pay for my travel within the USA, so I hatched a plan:

First I had to prove that I actually have aniridia, at a genetic level, not just the physical symptoms of no irises.

I started by writing to various health authorities to request copies of my medical records. This wasn’t easy because many of the places where I was a child patient have since or closed merged with others.

It turned out that the results of the genetic testing I had when 4 years old are not in my records. So through a roundabout process of participating in other research into CAPD and getting referred back to Moorfields Eye Hospital where I went as a child, I finally got a blood sample taken for a new genetic test.

The results said that I am “heterozygous for the mutation c.1080C>T in exon 9 of the PAX6 gene. This mutation changes codon 240 from arginine to a premature STOP codon (p.Arg240X).”

In the rare world of aniridia this is apparently one of its common causes. “Heterozygous” means that like everyone with aniridia I have a pair of PAX6 genes, one normal and one mutated – causing aniridia. The second part means that there is a mutation (spelling error) in the gene’s DNA for what should be an instruction to produce a protein necessary for eye development. Therefore the instructions are nonsense and the protein truncated and the eye doesn’t develop properly.

Meanwhile my parents and I were completing several detailed questionnaires about my and our family’s medical history. Even though Mum has a great memory and many notes this was quite a challenge.

Finally I sent all the papers off to NIH. I was delighted to be accepted into the study. For tourism purposes I declined to go in the depths of the US winter, opting instead for more temperate early April. Eventually the time off work was arranged, travel booked and places to stay organised.

I bought travel insurance independently. I was shocked at the extra premium charged purely because I am visually impaired. Unfortunately there was no way to tell the insurers I would be spending a third of the time away surrounded by the best medical equipment and doctors that money can buy! Thanks to some advice from others via the Aniridia Network UK Facebook page I got as good a deal as possible.

The last thing to do before going was to keep a diary of everything I ate for three days. This would later be analysed by a dietician during the study.

The transatlantic flight was a first for Zoe and me. Neither of us had been outside Europe before. We rented an apartment on East 9th Street – the East Village. Over seven days we had a fabulous time visiting:

The day after landing I got severe neck pain. I could barely move my head without hurting. Via my jujitsu sensei I contacted an excellent therapist. After his massage and acupuncture the problem was almost totally resolved.

I flew to Washington DC two days ahead of Zoe. I booked into The Edmond J. Safra Family Lodge. It’s a slightly odd place with serviced rooms, but self-catering in a communal kitchen, on the NIH campus for patients and relatives to stay for free.

The study took six days plus some overnight stays on the ward. I had engineered a weekend in the middle for tourism. In total I was in Washington DC for nine nights.

Everything was expertly organised by Amanda, the study coordinator. I met the lead researcher, lovely Dr Han a number of times too. The tests were fascinating, varied and a pleasure despite the impositions – admittedly sometimes uncomfortable or even painful.  I was the 14th participant to have only aniridia.

A whole afternoon was dedicated to eye tests to assess: profile vision, acuity, tear production and many other factors. Lots of scanners and cameras were used. The technician had to keep holding my eyes open. They said I had “strong eyelids” but that was clearly code for “non-compliant”! Afterwards though they gave me the amazing imagery they had captured.

I had two stints inside an MRI scanner, once for my skull, the second for my lower abdomen. Again I have the complete set of incredible pictures for posterity. Another scanner provided me with an image of my complete skeleton. All these are unique mementos. 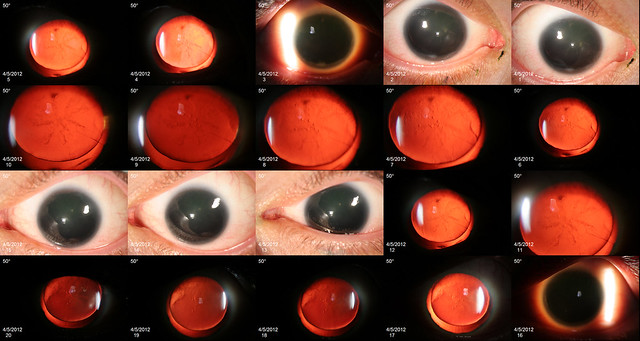 The hearing and auditory processing tests included repeating different words or numbers played into each ear simultaneously. Another involved describing sequences of high or long and low and short notes.

Sense of touch was checked with a thermode – a device held on the skin that can make itself hot or cold. I had to rate the pain induced from none to worst ever! The heat felt more intense to me. I also endured the maximum time permitted, 3 minutes, for holding my hand in very cold water.

To assess smell I was given a booklet full of scratch and sniff panels. For each one I had to identify the odour from a choice of four possibilities. This was quite fun, though as root beer doesn’t exist in the UK, some were a bit tricky!

The psychiatry assessment was stimulating. I had to explain the meanings of words, perform complex mental arithmetic and answer general knowledge questions. The questions relating to US history were a little unfair for an Englishman.

One night I had 25 electrodes glued to my head and more stuck all over my face, chest and legs. I had to sleep like this while a technician monitored me. I didn’t sleep very well but it was easier than I’d feared.

My birthday fell during the study. On that day I was:

On the plus side:

Ordering the hospital food took some mastering. The range of the menu and service was excellent. However the portions were small and they would only deliver precisely what you ordered. Otherwise you’d get cornflakes but no milk for example. I thought I would be safe by requesting a BLT sandwich. But what arrived was a clingfilm wrapped plate with stacked on it: two pieces of toast, lettuce leaves, bacon rashers and tomato slices – in that order. Also I had neglected to order butter for the bread! 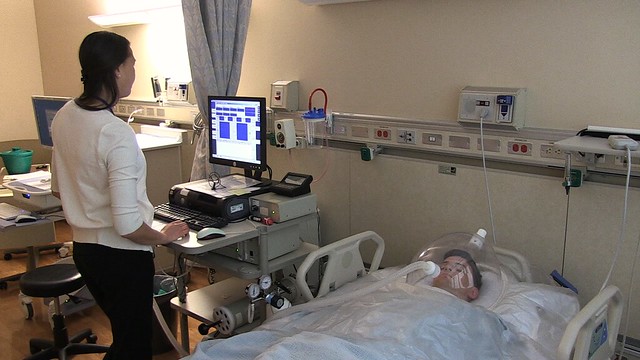 Throughout my stay I was shadowed by a man with a video camera. I’d consented to be filmed for a piece on one of the NIH websites. It was interesting watching someone new doing a job my regular colleagues do. Ben was a consummate professional. I’m looking forward to seeing the results on screen.

I was given preliminary results of all the testing before leaving.

I’ll look into dealing with these issues in good time.

Everyone on the research team and the ward nurses came to say goodbye at the end. Some of them had been working on my tests behind the scenes so knew me better than I knew them or myself! They had all been so nice and accommodating; I was touched to see them all.

At the weekend and a couple of other times, Zoe and I had time to leave the NIH campus to go into Washington DC together. We mostly walked around seeing:

Zoe had more time to explore and also took a day trip to Baltimore to see the aquarium there.

We flew out of Washington DC and were met at the airport in Chicago by my cousin Jackie plus her adopted son Matt. It was a short drive to their house in Lake Forest north of the city. They and Jackie’s husband Rob made us very welcome for five days.

We spent some of the time visiting the sights of Chicago. The U-boat in the Science Museum was the highlight for me. But it was too windy for us to go up the tallest tower in America.  I liked seeing the elevated train “El” too. The location plus the week in hospital gave me a craving to watch old episodes of ER.

Playing with three year-old Matt was lots of fun too. Zoe and I have a few more catchphrases as a result. It was the first time I’d met my second nephew.

All too soon it was time to fly home to London. It had been an amazing trip that gave lots of special memories. Three quite different cities, different places to stay and different reasons to be there. Matt apparently asked when we were coming back, every day for a week after we’d left.

The last thing to do was to use the kit that NIH had provided, to send them four small test tubes of final urine samples. This was to measure the progress through my system of some heavy water (with extra neutrons but not radioactive) they’d had me drink to measure energy expenditure. I had to fill out forms about importation of hazardous chemicals to the USA and arrange for a FedEx courier to collect the package. A rather strange process.

I feel very lucky to have had the opportunity to take part in the study. I hope it proves useful for the research. It provided the inspiration and means for a brilliant holiday with lots of great experiences. Thank you to everyone who I met and who was involved in some way.